For some reason, I felt like turning my blog into something reminiscent of Hypercard. Maybe it's nostalgia? Maybe it's a throwback to an era from before the web? Maybe it's an ironic attempt to de-emphasize design over content? Maybe all of those.

Anyway. I found this great Chicago-inspired webfont, released under a Creative Commons license by Giles Booth. At first, I just used a local stylesheet to force it to be used on any site, but then I realized I wanted it running on my blog full-time. But I didn't want to have to create a new theme to do it. So, a plugin! 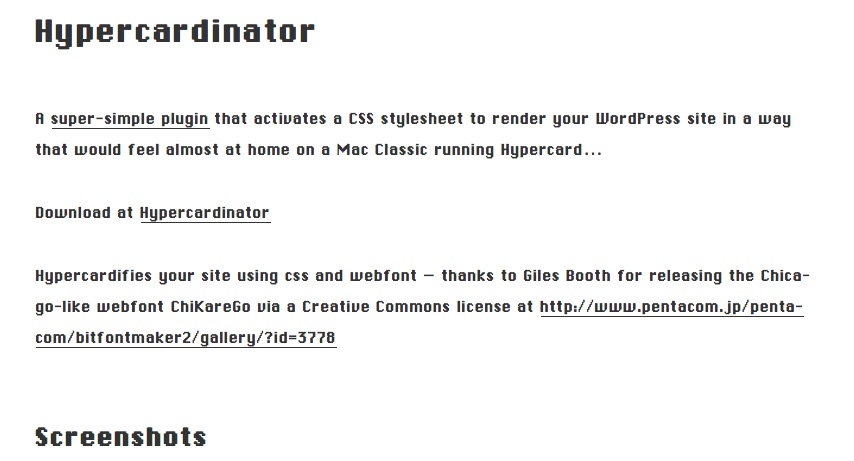 Hypercardinator was born. It adds a stylesheet to force ChiKareGo to be used for all content and navigation on a site. Which was a great start, but didn't feel like it went quite far enough. So I added some styles to attempt to non-destructively force all images to render in high contrast black and white (I couldn't figure out a way to use the more Hypercard-native Atkinson dithering, and didn't feel like spending more time at the moment to figure it out).

It's a trivial WordPress plugin. Try it out - if it doesn't float your boat, just deactivate the plugin without wrecking any of your site's config or layout.

Not using WordPress? Check out Bryan Ollendyke's webcomponent that implements the stylesheet and webfont.