I picked up a scanner a couple of months ago, and have been slowly scanning in old photos when I get a chance. A few batches in, and I’ve already done 451 photos. I’m viewing the activity as potentially rescuing family history from fading pieces of paper. I have no idea if JPEG files will still be readable in 100 years, but it’s worth a shot to try to preserve photos going back well over 100 years (the oldest photo is from before 1893). As I scan, I try to add as much metadata as I have – often it’s just a scrawl of a name on the back of the photo print. I’m struck by how metadata poor many of these photos are. I can’t even guess at what decade some of them were taken in. Some have a name or two provided, some a year, and some have a wealth of hand-written documentation. And the quality of the photos themselves – there are a handful that I’d describe as not bad. The vast majority are absolute crap, technically. Blurry, poorly exposed, and small – several of the older photos are only available as 1-square-inch prints – I’m guessing the cost of printing photos back in the 1920s-1940s made it prohibitive, but even when cranking up the resolution of the scans to 1200dpi, there’s just not a lot of image to work with. 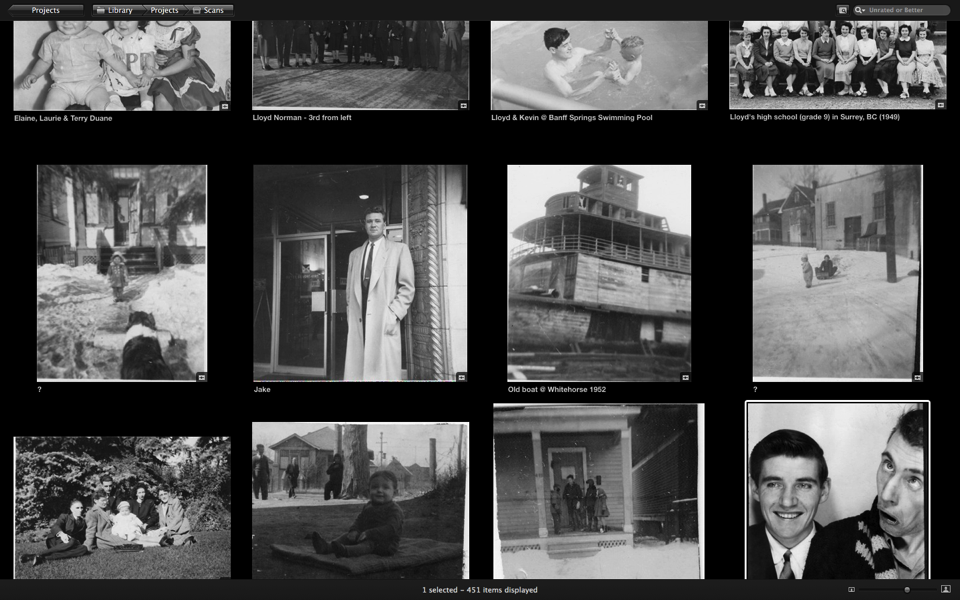 Some of the oldest photos, of my grandparents and my dad in his childhood, kind of blow me away. Especially, knowing that they’d likely be lost forever without being rescued. The only metadata available for many of the photos is inferred – either through association with other photos that have rudimentary data scribed on the back – or via automated tools like face recognition. It’s interesting to see names get pulled out of group photos, and to see photos of individual family members spanning over several decades.

Contrast that with the almost 30,000 photos in my own family archive (with a few hundred more ready to be scanned in a couple of banker’s boxes in the basement). Most of those photos have at least some metadata, and everything in the last few years has buckets of automated data – location, time, etc… – assuming Aperture library and image
files will be somehow readable in a few decades… 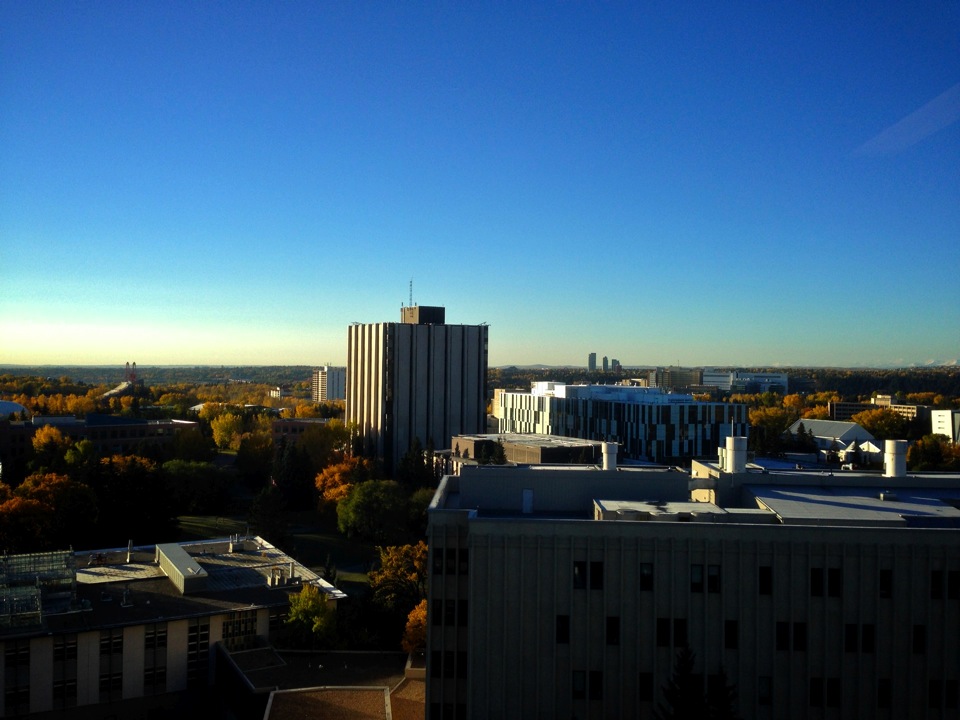 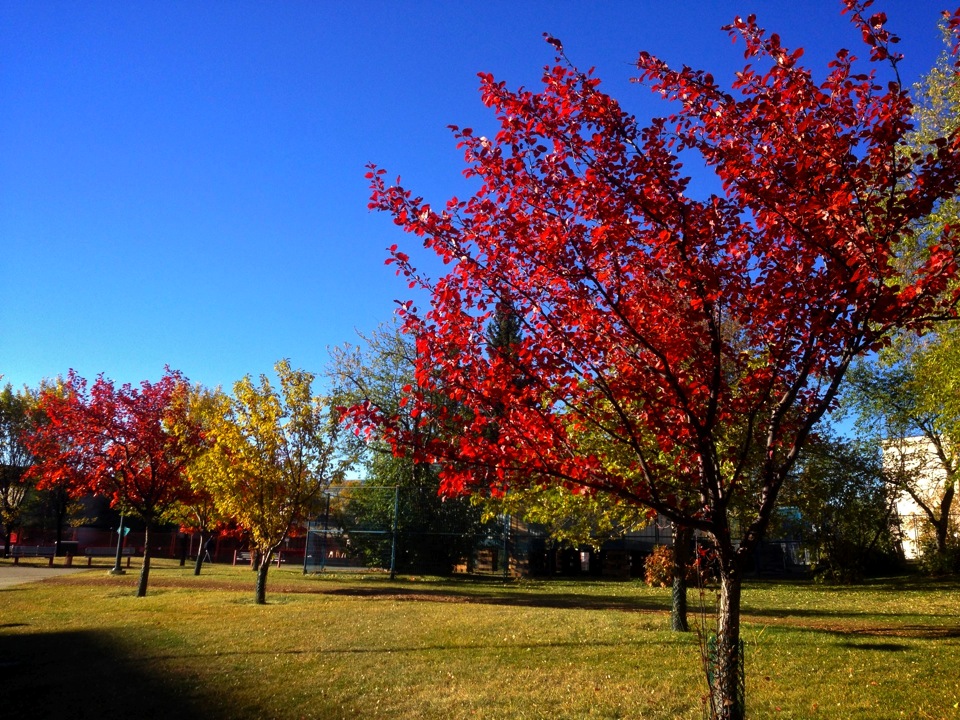 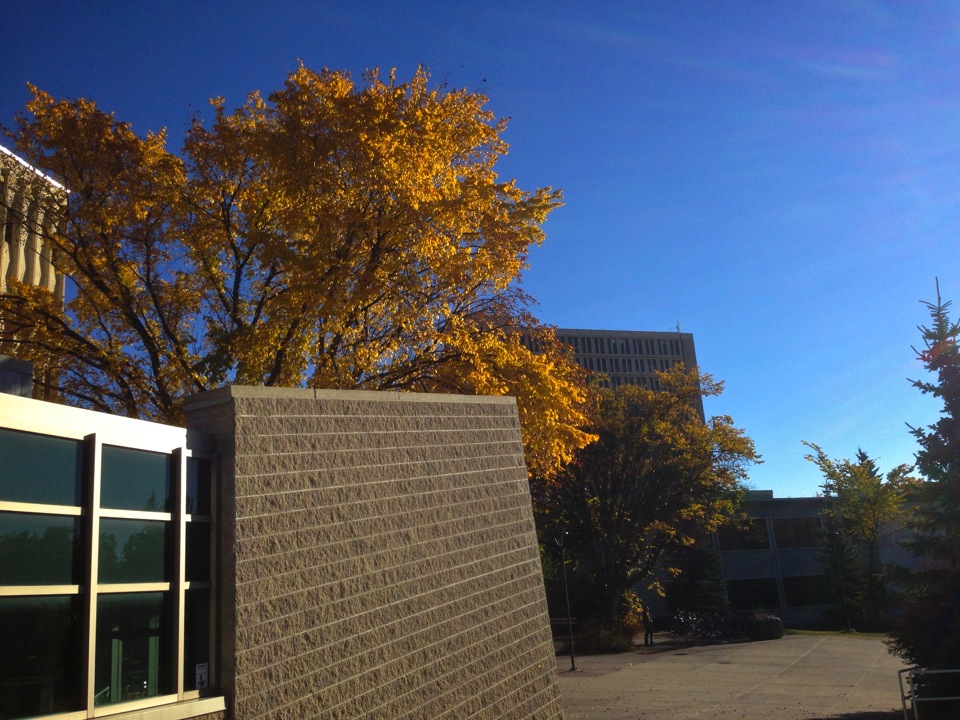 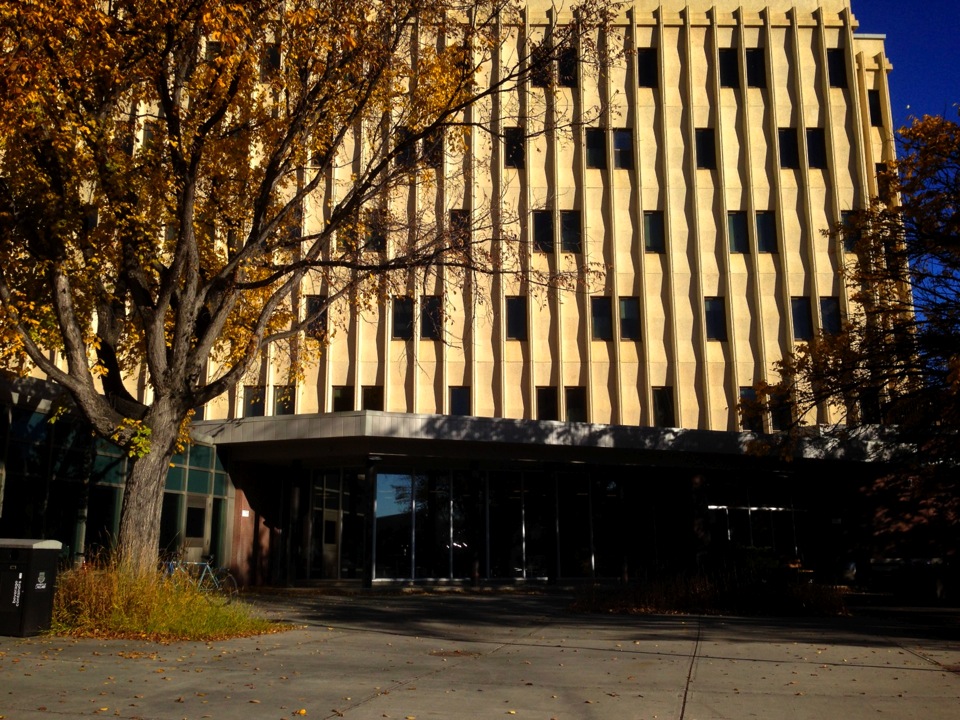 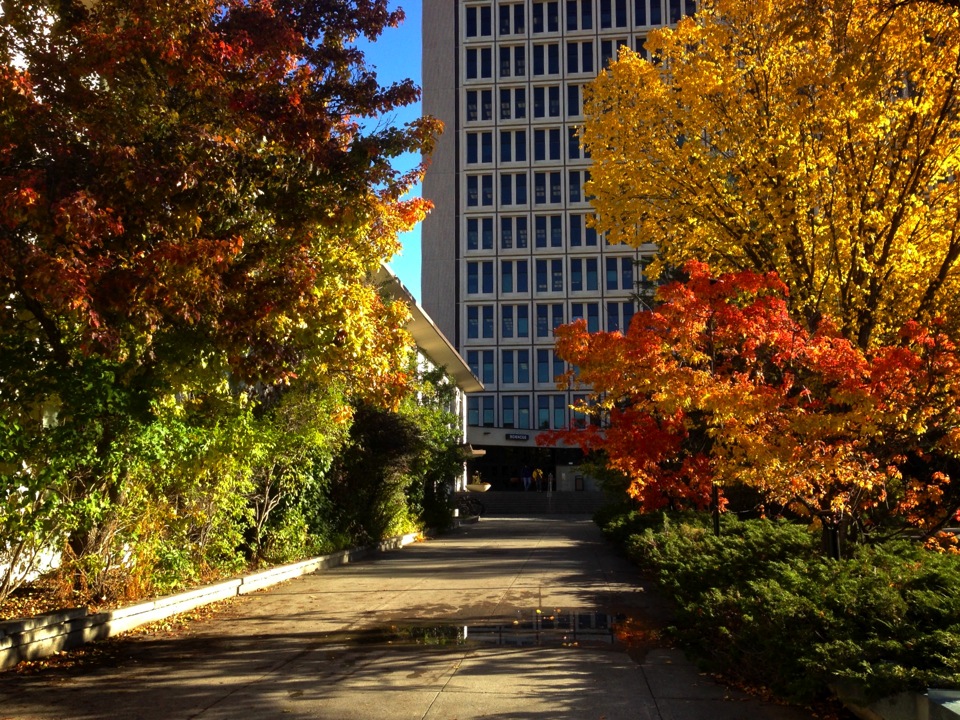 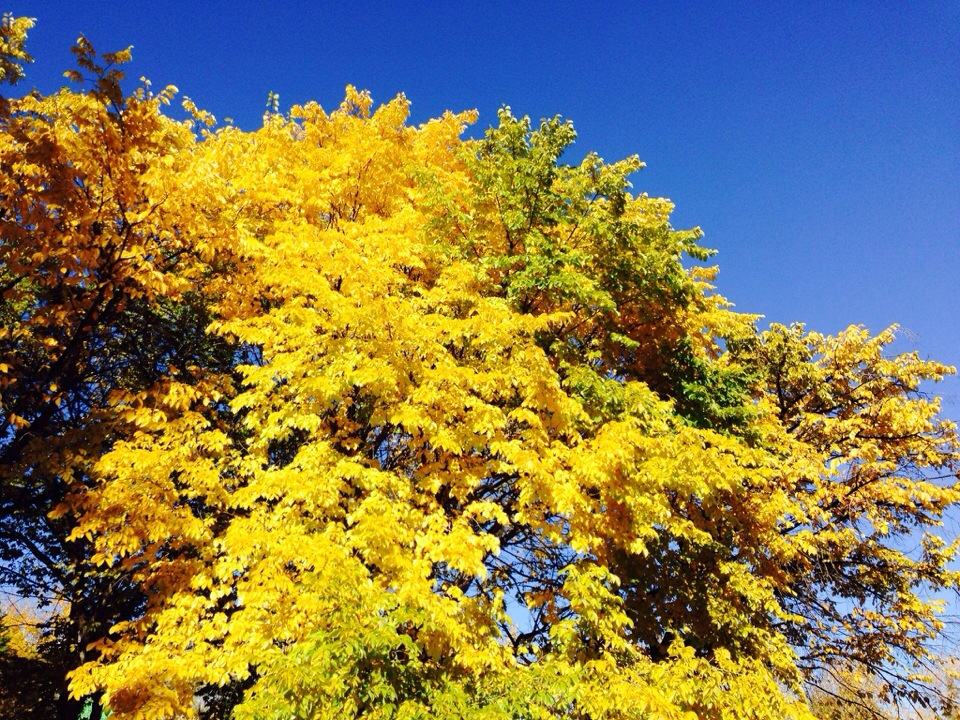 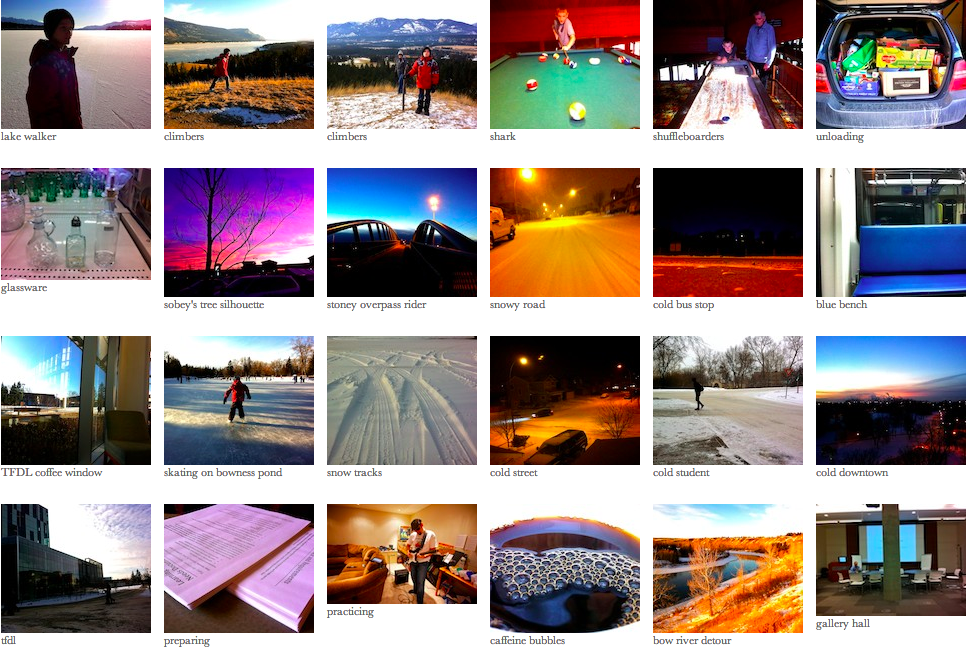 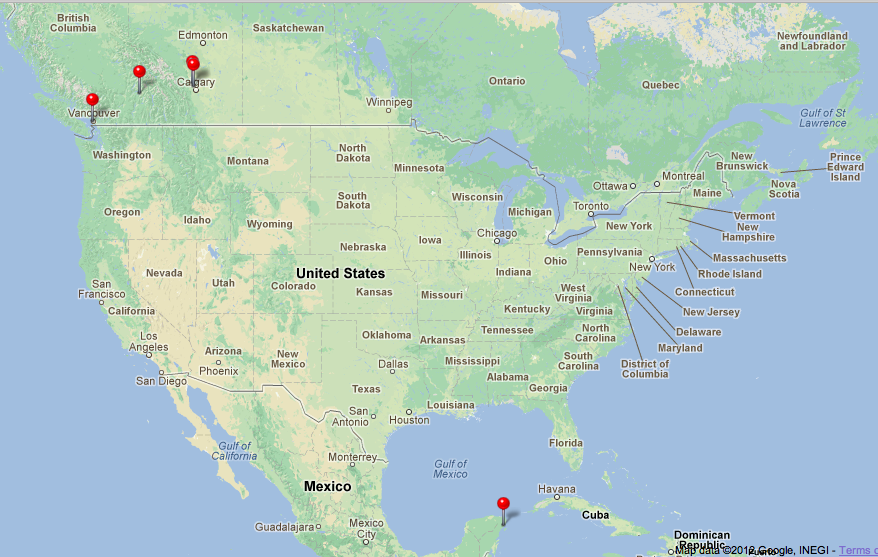 60 of my favourite photos from the year. What a year! 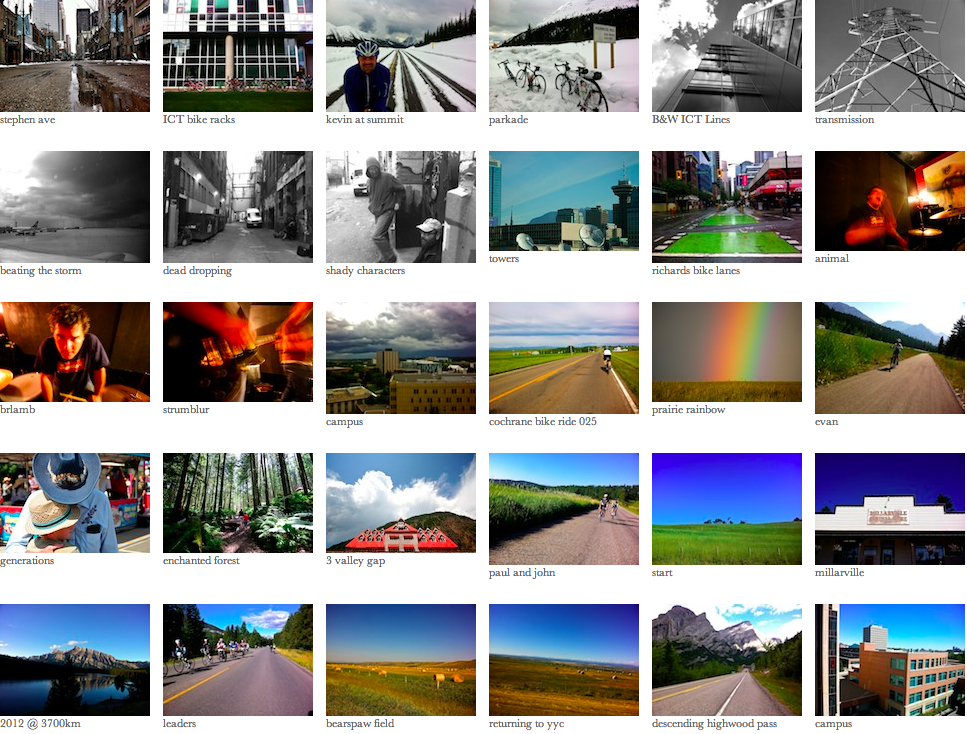 This is cool. Hipstamatic released a bunch of new lenses. I got a notification on my phone last night, and grumbled something about camera apps spamming me with ads. Then forgot about it. This morning, I see a post from Nick, referring to the official Hipstamatic blog post on the lens:

The Tinto 1884 lens uses facial recognition to recreate a very shallow depth of field unique for each photograph. This is similar in some ways to what some apps do with tilt-shift or radial blur effects, but Hipstamatic’s effect is more customized for faces. Notice, for instance, that it will leave eyes and mouth unaffected, while blurring out the nose and forehead. If the app can’t detect a face, it just switches into a radial blur.

A software camera with a software lens that does more than just compositing grunge effects layers and vignettes onto the photo. It’s actually manipulating the transformations in (near) realtime, based on code within the software lens. In this case, facial detection is used to direct the application of blur. How awesome is that? Check out the first sample photo I shot with the new Tinto lens: 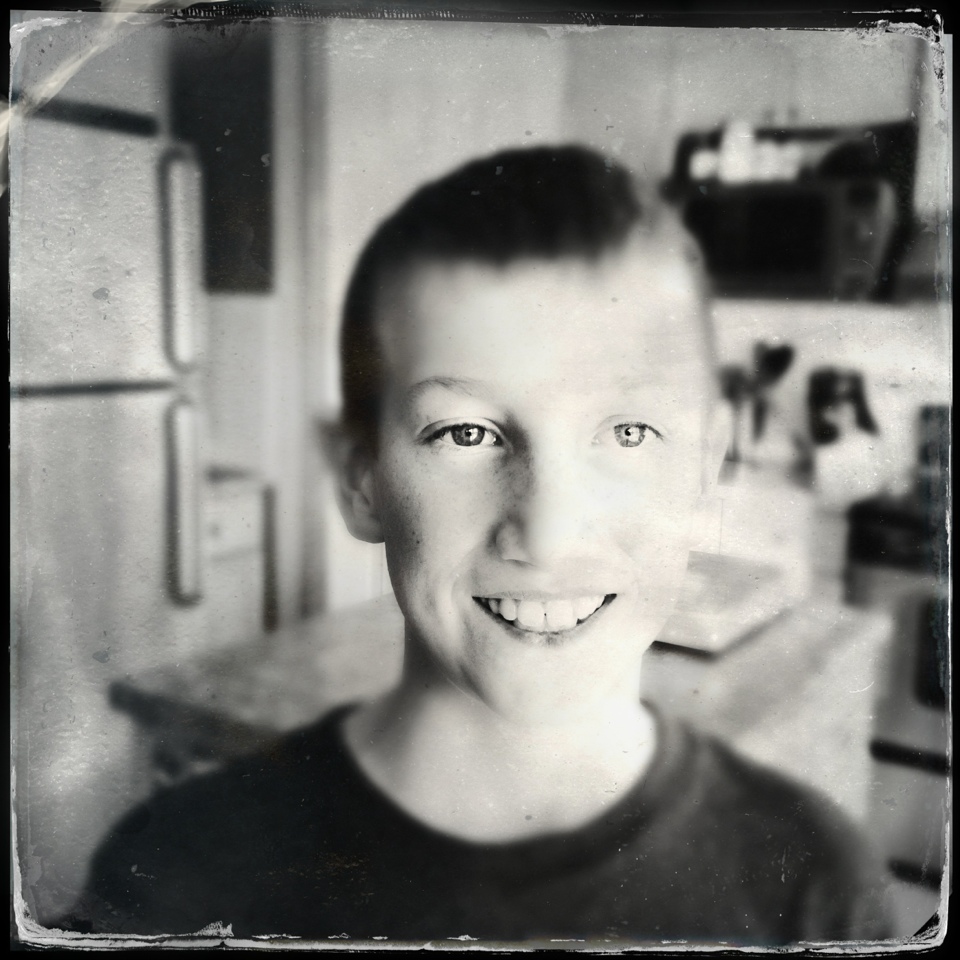 The possibilities for software-enabled realtime transformation are interesting, too. What about a lens that uses your geolocation to tint a photo (similar to the Breaking Bad “New Mexico is brown and Mexico is yellow” tinting). Or based on who is in the photograph, and their relationship to you. Or based on time of day. Or how many messages are waiting in your inbox. or how fast or far you’ve traveled recently, etc…

Anyway. This is the first software lens I’ve seen that does something more interesting than just pasting a few layers of gunk onto a photo and calling it vintage. You may not like the aesthetic of the end result, but the process is absolutely fascinating. We headed to the Sicamous area for a week away. I could totally get used to lake country… I was just checking my RSS feeds, and saw an article from CBC News. I thought to myself, “hey! I’ve seen that photo somewhere. wait a minute… I think I took that photo…”

Some quick poking around on my gallery site1, and hey presto. Yup. I shot it back in June, 2009, not far from my house.

Looking at the article on CBC’s site, there doesn’t seem to be any mention of that fact. I’m guessing someone at CBC did a search on Flickr for “lightning in calgary” or something (back when I had a Flickr account), and found the photo. I’d also guess that it’s used whenever there’s a “lightning” story on the site.

This whole credit thing is messy. They (likely) found a photo that was shared under a Creative Commons license, and decided to use it. They goofed on the credit (but, so what), but they were trying to do the right thing. If a news organization struggles with providing credit for a photo, how do we expect everyone else (teachers, students, etc…) to be able to do it? And, does it really matter?

When I nuked my Flickr account, I had planned on migrating some of the sets onto my own website somehow, but wasn’t sure how, and wasn’t sure it was important to hurry along. Then Jen mentioned something about missing being able to look through a couple of the old sets. Dang. OK. That was the nudge I needed.

One of the things I missed from my now-nonexistent Flickr account was the “Sets” page, with links to historical photo sets. Easy to rectify. I just exported a bunch of the more relevant/interesting/fun sets from Aperture, as static “web page” exports. I created a “gallery” folder on the server, and dumped them all in there. I could have just let directory indexing provide an ugly automatic menu of photo sets available, but that’s not good enough. So I googled together some simple PHP code that builds a visual gallery page, with links to each photo set.

The thumbnails are pulled by randomly picking an image in the “thumbnails” folder in each set. They’re different each time the gallery page loads. I also added in a link to my “ephemera” photostream. There’s no RSS, no comments, no animated-GIF-unicorn-awards. Just the photos.

I picked a photo size of 840px because it’s big enough, and is coincidentally the same as the width of my blog posts so if I want to use any of the photos, I can just use them directly without any futzing.

I didn’t get copies of the photos from the borrowed camera until just recently, and just finished going through and editing. This is the first wedding I’ve ever shot, with any sense of responsibility for capturing the whole thing. Lots of rookie amateur mistakes in there. It’s amazing how fast things happen in a wedding, when you’re trying to capture it all. And how quickly the lighting goes south – the wedding took place on a beach, just before sunset, so we had amazing light for most of it, and then harsh oblique shadows at the end. I didn’t have any lights aside from the on-camera flash, so things got messy in a hurry. Thankfully, I pumped off about a thousand frames – whittled down to 80-something.

It was an absolutely beautiful ceremony – both in the setting (on the beach in Playa del Carmen, Mexico), and in the casual relaxed fun feeling throughout – the bride and groom were both laughing through much of the ceremony. So much fun. If I were to shoot a wedding again, I would do things a bit differently. For starters, I’d use my own camera (mine was out of action that week – sensor far to messed up to risk shooting a wedding with it). I’d shoot RAW (the borrowed camera didn’t have room on the card to handle more than JPEG if I was going to shoot around 1000 frames. I’d have proper lights. I’d maybe have 2 cameras ready – one with a long lens for closeups, one with a wide lens for catching the scene.

We actually had 3 shooters for the wedding – myself, my nephew Jordan (brother of the bride) and his wife Kelsey (who was a bridesmaid, and has a fantastic sense of artistic direction) – photos on their faceplace, and my son (9, with his own camera). With them all combined, I think we actually did a surprisingly good job at shooting the wedding.