I cringe at how this post will likely be read – as a fanboy OMG DIS AWESUM! post. Whatever. I promised several people that I’d write up something about my early experiences with the iPad Pro and pencil.

As part of my role in helping to refine the learning technologies platforms and support on campus, I force myself to use as many different devices as I can in order to make sure I understand what people will be bringing to campus. I used a Surface Pro 3 for about 6 months last year – and while the hardware was OK, it felt comically big. The digital ink, though, was fantastic. In the end, I couldn’t get past how horribly the software was (not) designed for touch interaction. I wanted something that size (but not as thick – Surface Pro 3 felt like carrying around a 12″ picture frame), but with digital ink that was as good as the Surface pen. But I went back to a combination of iPad Air 2 and MacBook Air as my non-desk computers.

And, I’ve been on the hunt for a good digital ink experience for the iPad. I’ve bought probably 10 different styluses. Stylii. Nothing was good. I tried the 53 Things Pencil. The Wacom Bamboo Finepoint. Rubber-tipped styluses. Bluetooth-enabled styluses with pressure sensitivity (but none of them worked well in more than their demo apps). Even the Wacom Cintiq desktop display (which is nice, but weighs about 100 pounds, and makes a godawful SCRATCH SCRATCH noise when writing with it). I gave up, and went back to using our 99-cent Taylor Institute conference swag giveaway pens with cheap rubber nub.

Then, Apple announced the iPad Pro. My initial reaction to the announcement was something like “looks cool. Kind of huge. And holy crap is that expensive! I don’t think so.” It does seem rather expensive, at about $1500 Canadian (probably more now, since the Canadian dollar is diving quickly…), once the keyboard cover and pencil stylus are added. I read some reviews from people who had been seeded with pre-release units, and they all raved about the pencil. And early adopters consistently backed that up. The specs listed the screen as being basically the same size as a MacBook Air, or the Surface Pro 3, while being much lighter than either. So I figured it was worth a shot. Worst case, I’d add it to our Technology Lending Library for people to try out. I ordered one in early December, and it arrived about a day before I headed out of town to present at McMasters’ MIIETL conference. Well, the iPad itself arrived. The keyboard and pencil would be strangely delayed until January. No worries. I figured I’d travel with the iPad and just treat it like a big iPad until the rest of it arrived.

It worked great – at the conference, I presented using the iPad (with HDMI lightning dongle), controlling Keynote from my phone. Worked perfectly, and seemed to be a much smoother presentation process than many other conference presenters had with laptops and USB remotes etc.

I kept using the Pro just as a big iPad, and it was pretty solid. Then, the keyboard arrived. It’s actually a really nice mobile keyboard- it’s quieter than the Anker Bluetooth keyboard I had been using on the iPad Air. It feels like a cross between the membrane Atari 400 keyboard and the IBM PC Jr chicklet keyboard. But more solid than either. It’s quieter than the keyboard on my MacBook Air, meaning I don’t worry as much when typing when in meetings or consultations.

I’ve been using the iPad Pro as my non-desk computer since it arrived, and with the keyboard it handles probably 95% of what I would do with a MacBook Air. The iPad can’t run Gephi. And some of the finer layout in Pages and Word documents is just too clumsy to do on the iPad. But for everything else, I’m more… what. At home? Productive? No. It’s not just about productivity. Happier? Some combination of these things. It’s hard to quantify. It just feels right, to me. 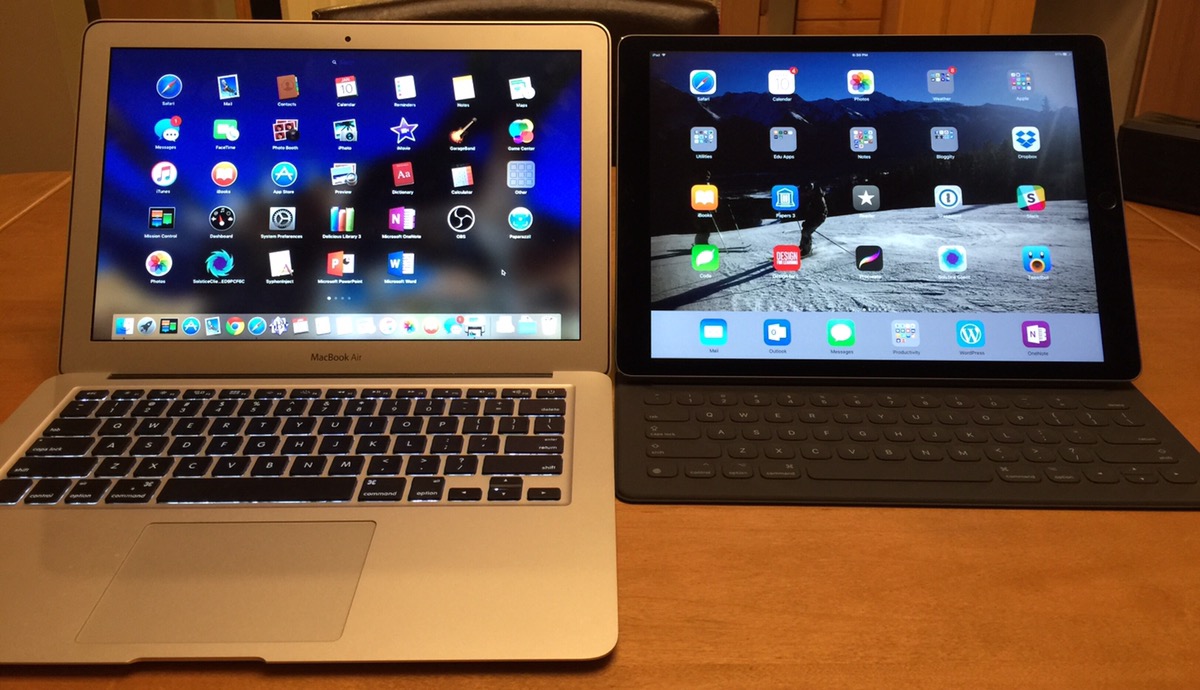 Then, the pencil arrived. It looks like a pencil. It feels like a pencil, with good weight and balance. I plugged it into the Lightning port on the iPad and it paired automatically. And then I fired up OneNote to try it out. Holy. After using squishy rubber nub styluses and hard tap-tap Bluetooth ones, it felt completely natural to be writing with the pencil. It felt better than the Surface Pro pen. It is the nicest digital ink I’ve ever used. 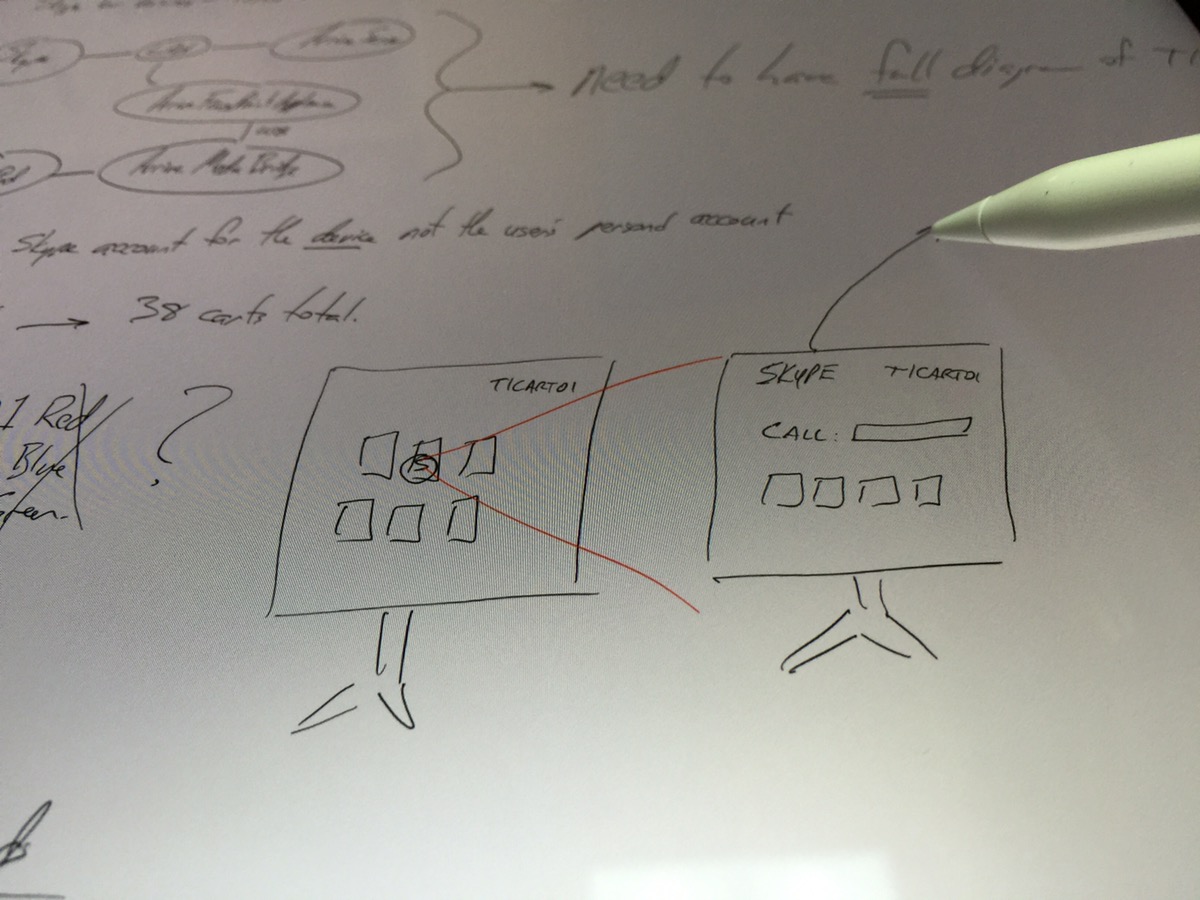 In the 2 weeks since the pencil arrived, I have found myself taking notes and planning with ink instead of typed text. To me, that’s a huge deal. I think by writing and doodling. I have a stack of full Moleskine notebooks, sketchpads, etc. on a shelf at home. There’s something about drawing a sketch for an idea, filling in notes in 2 dimensions, as opposed to serially entering ascii characters via keyboard. Using a pen is tactile. Drawings and printing have dimensionality. They exist in relation to other ideas that share a page, rather than just being further down the textfile.

I’ve been thinking more visually. I’ve been sketching. Planning. I had been doing less sketching over the last couple of years, as I moved everything into Evernote, and now into OneNote. It had become more important to have everything in one place, rather than having some things in OneNote and some in a Moleskine (and yes, I can take photos of notebook pages to add to OneNote etc… but it’s just not the same. It’s cumbersome. It doesn’t get done, and then I’m missing stuff). Now, everything is in one place, available on any device I use, and is searchable. Even my printing and sketches. Combine that with Procreate for making complex sketches and art with layers and insane flexibility? The pencil has amazing pressure sensitivity, and you can shade as you would with a real pencil. Perfect. 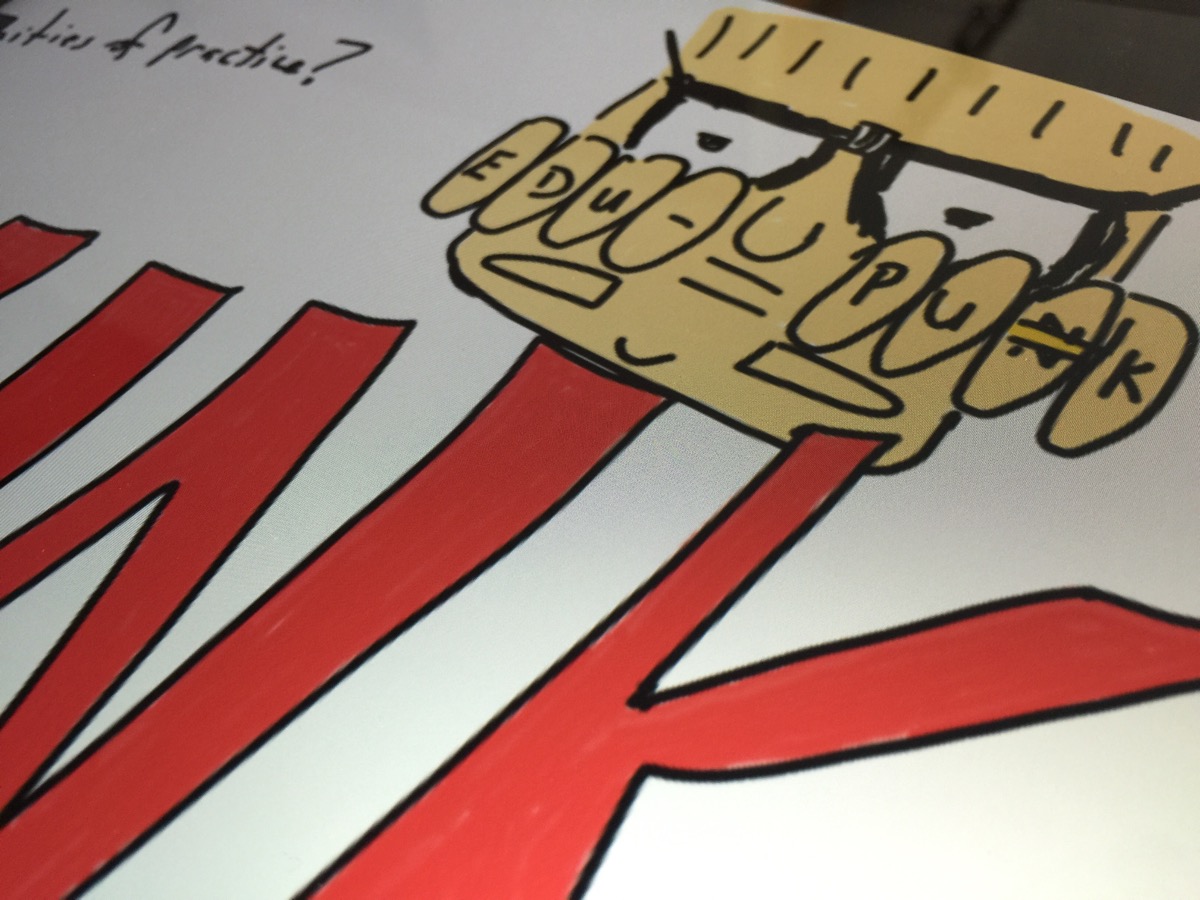 I had to dig through my old notes that I had taken on the Surface Pro 3, to compare with the Pencil. Here is a comparison of a short snippet, with the same text printed using the Pencil, with the el cheapo rubber nub stylus, and with the Surface pen. My penmanship is horrible, but that’s part of it. It’s mine. My notes feel like they belong to me. 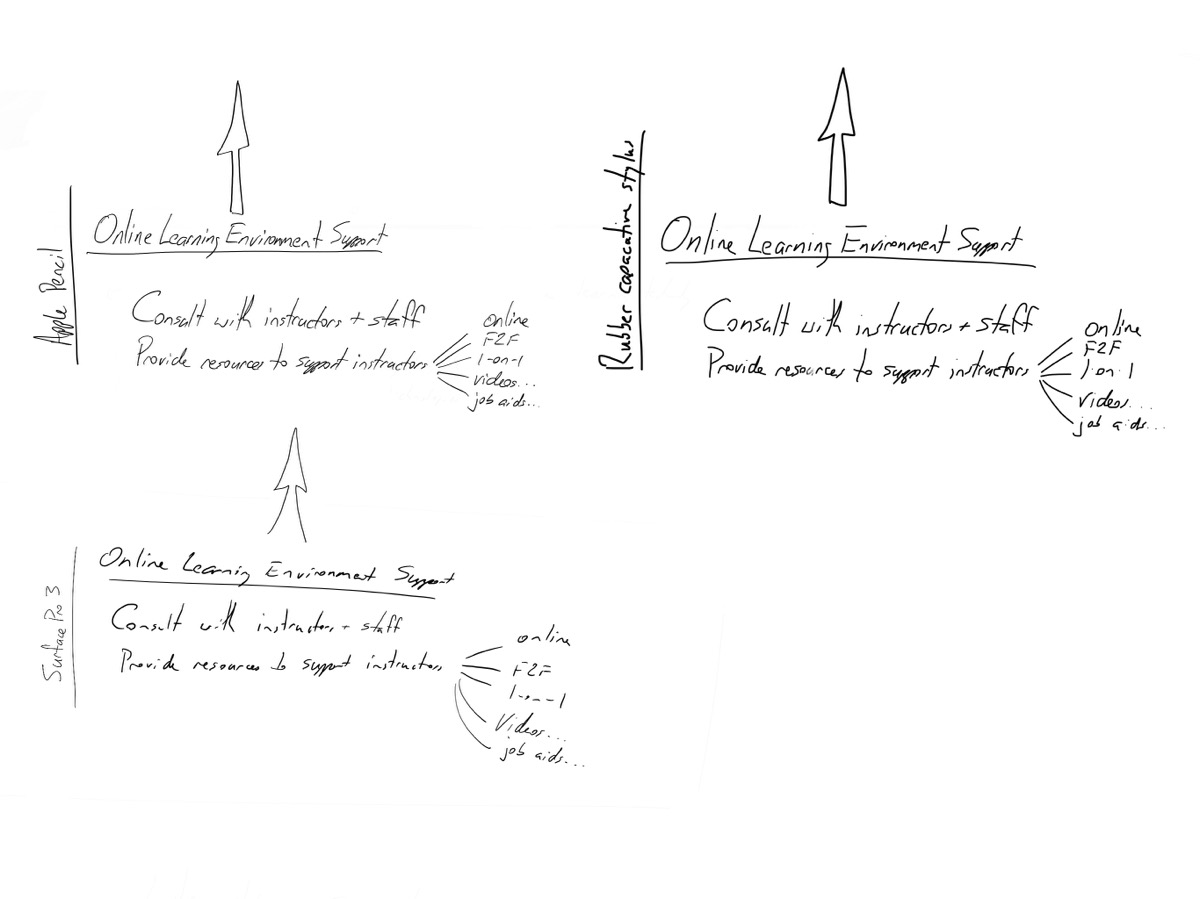 So. For me, the iPad Pro is the perfect size. The battery easily lasts all day. The keyboard is actually pretty good. And the pencil is the best digital ink I’ve ever used. It does seem a little expensive, but if it replaces a laptop that’s not too bad. And, I’m guessing the pencil will be compatible with other non-Pro devices from now on. Add on a cheap sleeve case, and it’s a pretty ideal mobile system.

Update: I forgot to add a bit about how Microsoft Office apps require an active Office 365 license in order to edit files. So. Yeah. They do. All files in Office apps are read-only. Even though the iOS apps are free on smaller devices, the Pro crossed an imaginary line in Microsoft’s licensing department, meaning an additional subscription is necessary. So, even though my campus has a site license for Microsoft Office on all platforms, iOS > 9″ is handled differently. 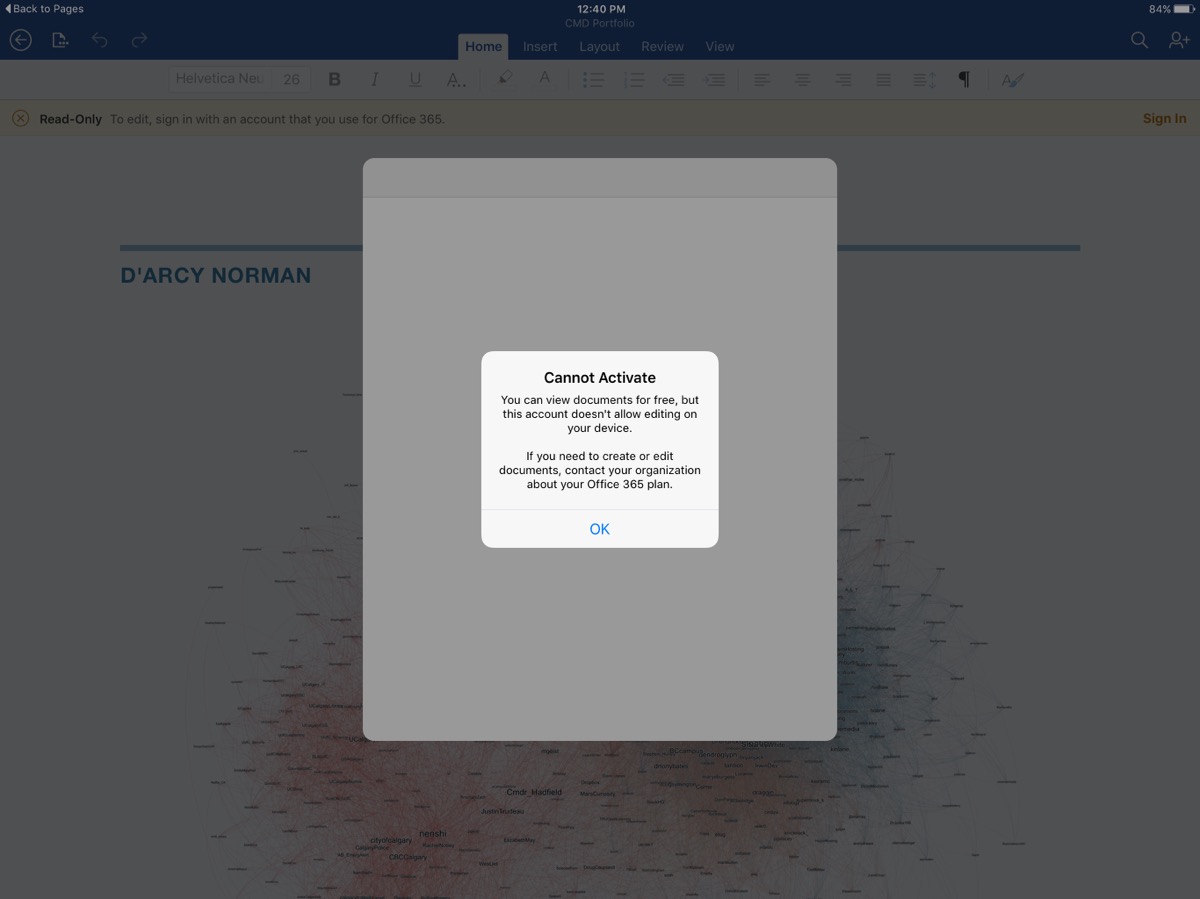 Nothing that a (thankfully discounted) $80 university O365 license didn’t solve (I’m not included in our campus O365 license because I’m not a student – faculty and staff aren’t included – which causes some issues for sharing things with students etc.)
I had tried shifting to Pages/Numbers, which can open and export Office files, but it was just too awkward to use on a daily basis. Office files are just a fact of life at a university (and, I’m guessing, most places with more than a few people on staff). the ballot for the 2010 Calgary Mayoral Election. It’s a pretty full roster, with 3 front runners.

I’ve voted in every election since I turned 18. This is the first time I haven’t felt like I was throwing my vote away. There’s a very real possibility that my candidate will get elected. Go Nenshi! I stayed home with The Boy™ today, and we spent some time working on homework together.