The Taylor Institute has 5 learning studios, designed for active and collaborative learning. People who are using the space have access to some great technology to support their work, including 37 “collaboration stations” (we really need to come up with a better name for those…).

Here’s a quick-ish demo of the basic functionality provided by the stations, recorded using the lecture capture system built into the learning studios.

Technologies mentioned and/or used in the video:

Fall 2014 Block Week kicked off today, meaning we just pushed into the 2014-2015 academic year. Holy. The last one is basically just a blur. But, we did a surprisingly epic number of major things as a team1:

To get the campus community through the whole thing, I’d been using a diagram to outline the flow and timeline: 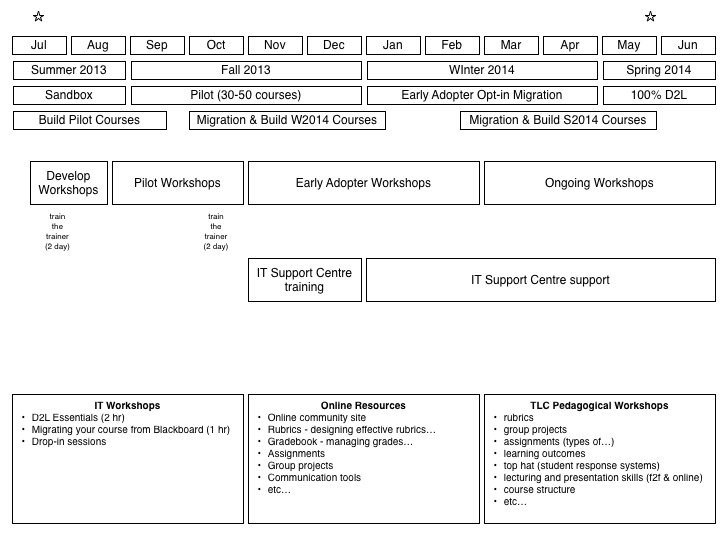 The 2 stars indicate (left) when we got access to our D2L server, and (right) when we had to turn off access to the Blackboard servers. Everything was driven by those dates, and mapped out over the academic year with semesters defining the major stages. The surprising/amazing/relieving thing is that we actually stuck to the schedule. I didn’t have to revise that document once, after using it last summer to outline the process. Wow.

On top of that, the shiny new Technology Integration Group in the Taylor Institute for Teaching and Learning’s Educational Development Unit had a bunch of other stuff to do:

So, while 2013-2014 was a year of pretty epic and overwhelming changes, I’m looking forward to the big pieces stabilizing this fall, so we can start pushing at the edges a bit more. We’ve got lots of ideas for things we can do, once the major changes are done for a bit. That roadmap will be sorted out later this month, but it’s going to be a really fun year!

The job posting for the position of Director, Educational Development at the new Taylor Institute for Teaching and Learning was just published.

Within the vision for the Institute for Teaching and Learning, the EDU Director will play a key leadership role in guiding the transition of the former Teaching and Learning Centre to an integral component of a more comprehensive institute. The Director will manage and promote a collaborative spirit among all staff within the EDU and between the EDU and the University community. The Director will liaise with deans, chairs, faculty, librarians, teaching assistants, student services professionals, and students to encourage the development of research-informed learning and teaching methods, including the integration of appropriate technologies to improve learning. He/she will also lead inquiry into selected University of Calgary educational development practices for the purpose of understanding and improving the impact of initiatives. The Director will also pursue relationships with institutions in Alberta and other external organizations to advance the work of the EDU.

Tenure track faculty position, so it needs a PhD. 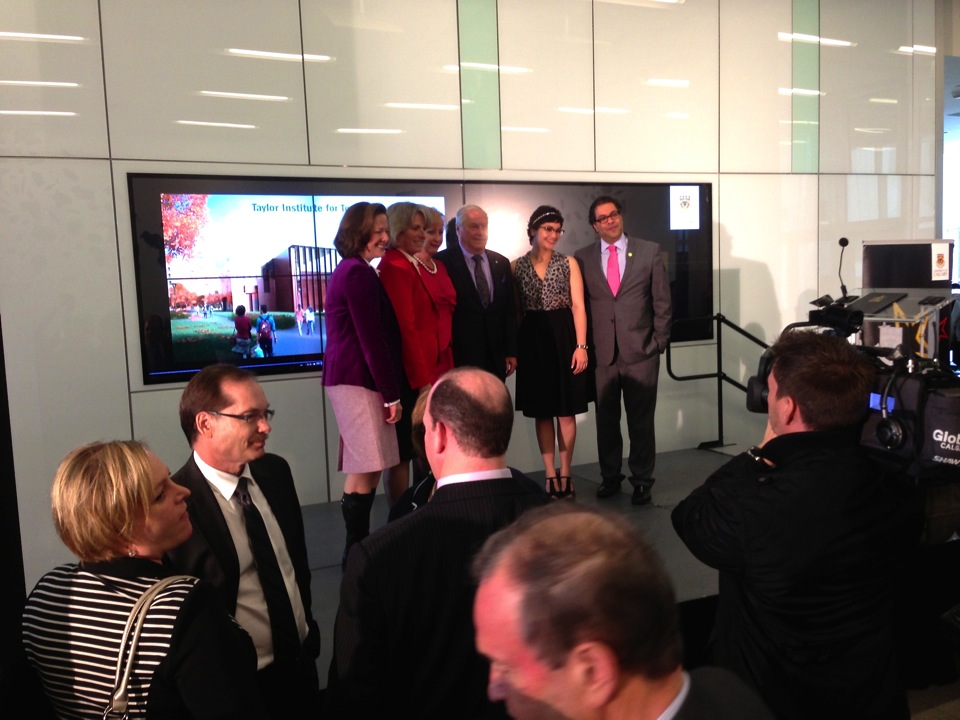 Premier Redford, President Cannon, Ruth & Don Taylor, Kenya-Jade Pinto, and Mayor Nenshi at the announcement of the Taylor Institute for Teaching and Learning