Poster sessions are an important part of any academic conference – providing a way for researchers (including both faculty and students) to share their research in a format that supports describing methods, discussion, and results as well as fostering discussion about the project. Normally, these posters are printed on large format printers, carefully rolled into tubes for travel, and hung from poster boards or walls in a conference venue. It works, but requires the posters to be completed days (or weeks) ahead of time to allow for layout and printing (and any revisions to fix typos or omissions). It also requires a the content to be static – it’s a printed poster – and the format usually involves a 4’x6′ sheet of paper packed with dense micro-print and footnotes.

When we were planning the 2016 University of Calgary Conference on Postsecondary Learning and Teaching, we knew it would be the first conference to be held in the new Taylor Institute for Teaching and Learning. It’s a facility designed from the ground up to be pervasively digital, and it felt wrong to be doing printed posters when we have 37 high quality screens for use in the learning studios.

So. We committed to doing the poster session in digital format. Something we’ve never done before. I’d never designed a digital poster – there are different affordances and constraints. Although the screens are full 1080p HD resolution, that’s actually much lower resolution and lower data density than people are used to with traditional large-format printed posters. We had to do some experimentation, but it turns out that it’s possible to take a poster file that has been prepared for print and display the PowerPoint or PDF version of the poster just fine on the 50″ displays on our collaboration carts1.

Another thing we had to plan for – the rooms where the posters would be displayed were being actively used during the conference. So, the rooms would need to be combined by raising 2 Skyfold walls and moving all of the tables and chairs out of the way. It took a grand total of 40 minutes from start to finish, and the entire combined Learning Studios ABC was ready for the poster session. Amazing. Many hands make light work, and the technology worked flawlessly2. 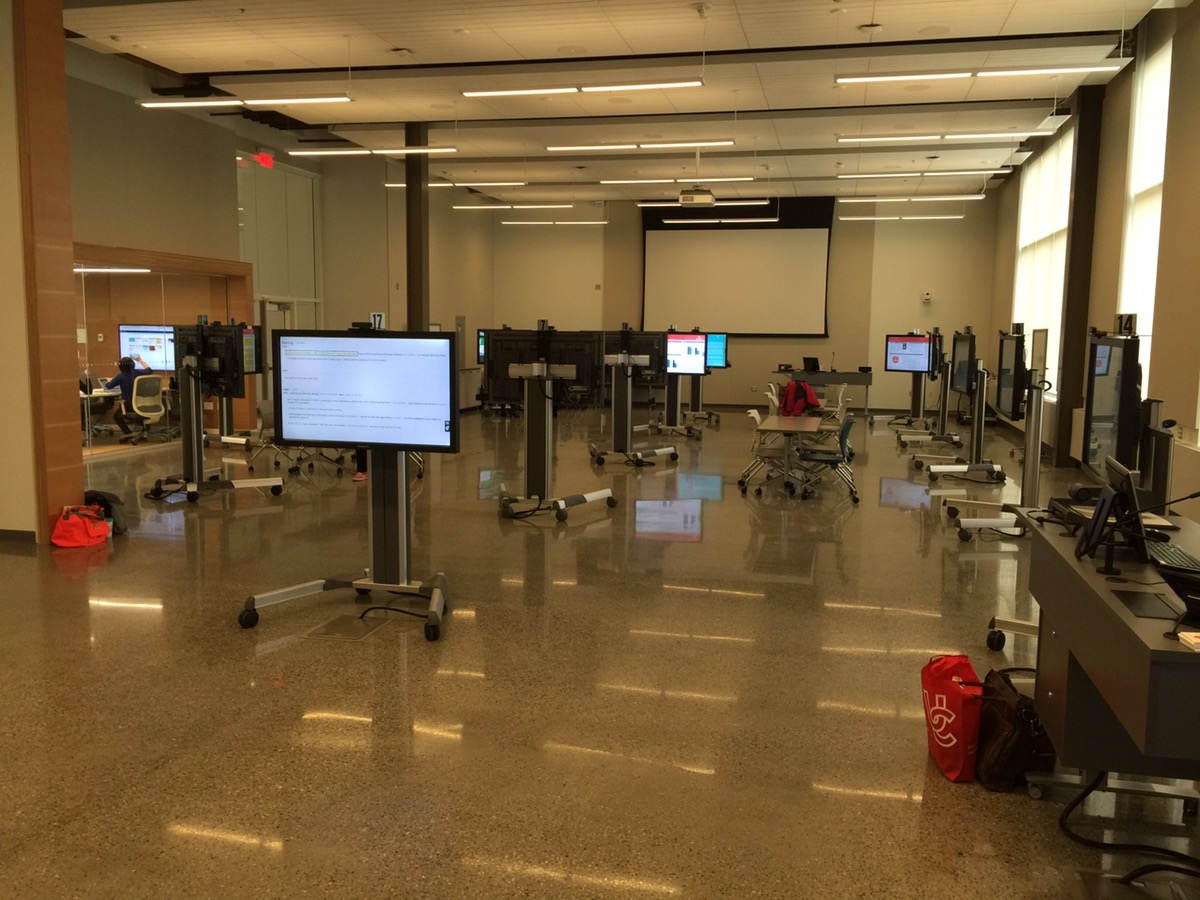 After the poster session (which worked – I was totally not anxious about that. At all.), I did some quick napkin math. We were using 18 of the displays, which works out to 75 feet of digital posters. And we only used half of the Collaboration Carts in the building3. Wow.

I drafted a one-page “How to design a digital poster” document for participants to get an idea of what might be involved. It grew to 2 pages. It’s a lame and incomplete guide, but I needed to give something to the people who were being asked to prepare digital posters… I also ran a drop-in session for people to try their poster designs, and my team consulted with several people about how they might prepare their material for the poster session. Best team ever.

We realized that most people will be familiar with creating PowerPoint and PDF files, and our Collaboration Carts4 don’t have the full Microsoft Office suite, so we needed to find a way to reliably display these standard files through a web interface. I initially thought of using Google Slides (as indicated in the howto document), but quickly discovered that Slides renders many things… non-optimally. But – there is a company that has some experience with Office files, and who provides a cloud-based web renderer for such things.

OneDrive to the rescue. The PowerPoint rendering is flawless, and the more-conventional posters with microtext rendered perfectly – and were completely legible on the 50″ HD displays! I set up a shared OneDrive folder so my team had access to upload copies of peoples’ poster files (most showed up with a PowerPoint file on a USB thumbdrive), so a quick drag-and-drop to the shared OneDrive folder took care of webifying the poster for display during the session. Easy peasy.

But not all posters were conventional print-posters-displayed-on-digital-display things. A handful tried something completely new – one team created an amazing graphic poster inspired by Nick Sousanis’ work on Unflattening. Amazing. And it won the “Best Poster” prize!

I created my poster (in collaboration / based on work by Brian Lamb) as a self-playing looped video file (authored in Keynote and Procreate ) – and really struggled with the format. The pacing is difficult to get right, because the poster runs in the background to foster conversation. For a video poster, people may not be able to stay for long, and wind up missing large chunks of the concept. I’ll work on it some more… Perhaps with a layer of navigation and interactivity, so participants can trigger brief video (or other) segments as they explore, rather than sitting and watching something like a museum exhibit… 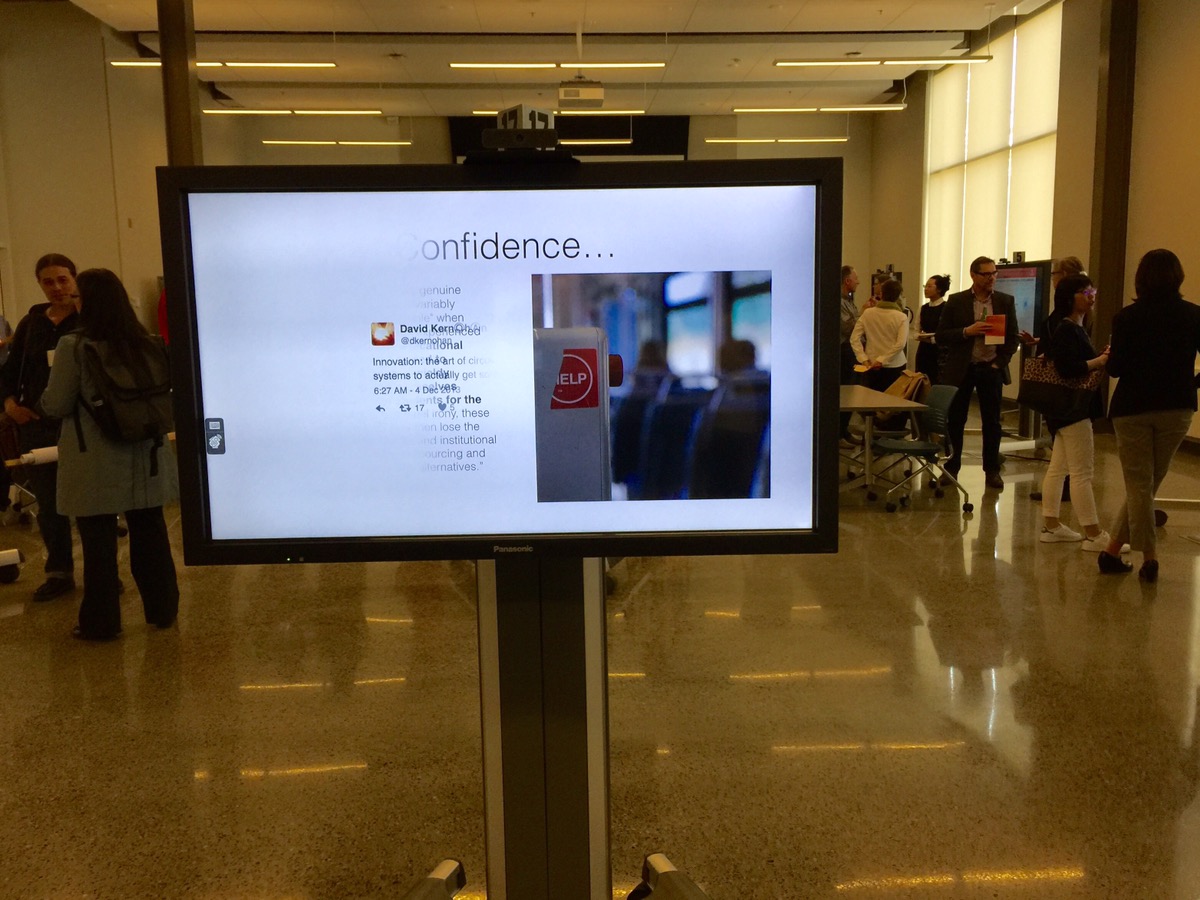 Quick observations from the session… It was by far the highest energy academic poster session I’ve ever seen. There wasn’t the usual “I’m here for the wine and food, and will talk to enough people that I won’t feel guilty about leaving early” kind of thing – people were genuinely having great discussions. Fantastic. We actually had to kick people out of the room after the end of the session because we had to reset the room for conference mode before day 2 of the conference (and we only had our volunteers for so long, so needed to finish that conversion before they headed out). We had to give 4 announcements, flash the lights, and eventually just throw the switch to turn off the poster displays before people started leaving. Amazing. I’ve never seen such a thing. I don’t know if it was a result of the novelty of the session – nobody had seen digital posters done in that way, at that scale, before – or if it’s yet another indicator that we have an absolutely incredible community of instructors and students at the University of Calgary…

One thing we’ll need to do is facilitate a series of sessions throughout the year to provide opportunities for people from across campus to come together and think creatively about what a digital academic poster could be – how can interactivity be a part of the experience? How can live data or external media be pulled in? What happens when the design constraints of a physical large-format printed poster are let go, and a poster is designed to take advantage of the affordances offered by the medium?

If anyone knows of any really good resources to help support mindful design of digital/interactive academic posters, I’d love to see them!